On a Saturday full of upsets, the 210 nearly pulled off their own when the UTSA Roadrunners football team fell just short against #15 BYU (4-0) with a final score of 27-20 on the road in Provo, Utah.

In a game in which the BYU Cougars were 35 point favorites, with the projected #5 draft-eligible quarterback in the country, NFL talent on the offensive line, and seasoned- 300 pounders along the defensive line, UTSA never fully let things get out of hand. “Our best was good enough,” a visibly emotional, UTSA head Coach Jeff Traylor said after the game, “We were just a play short.” 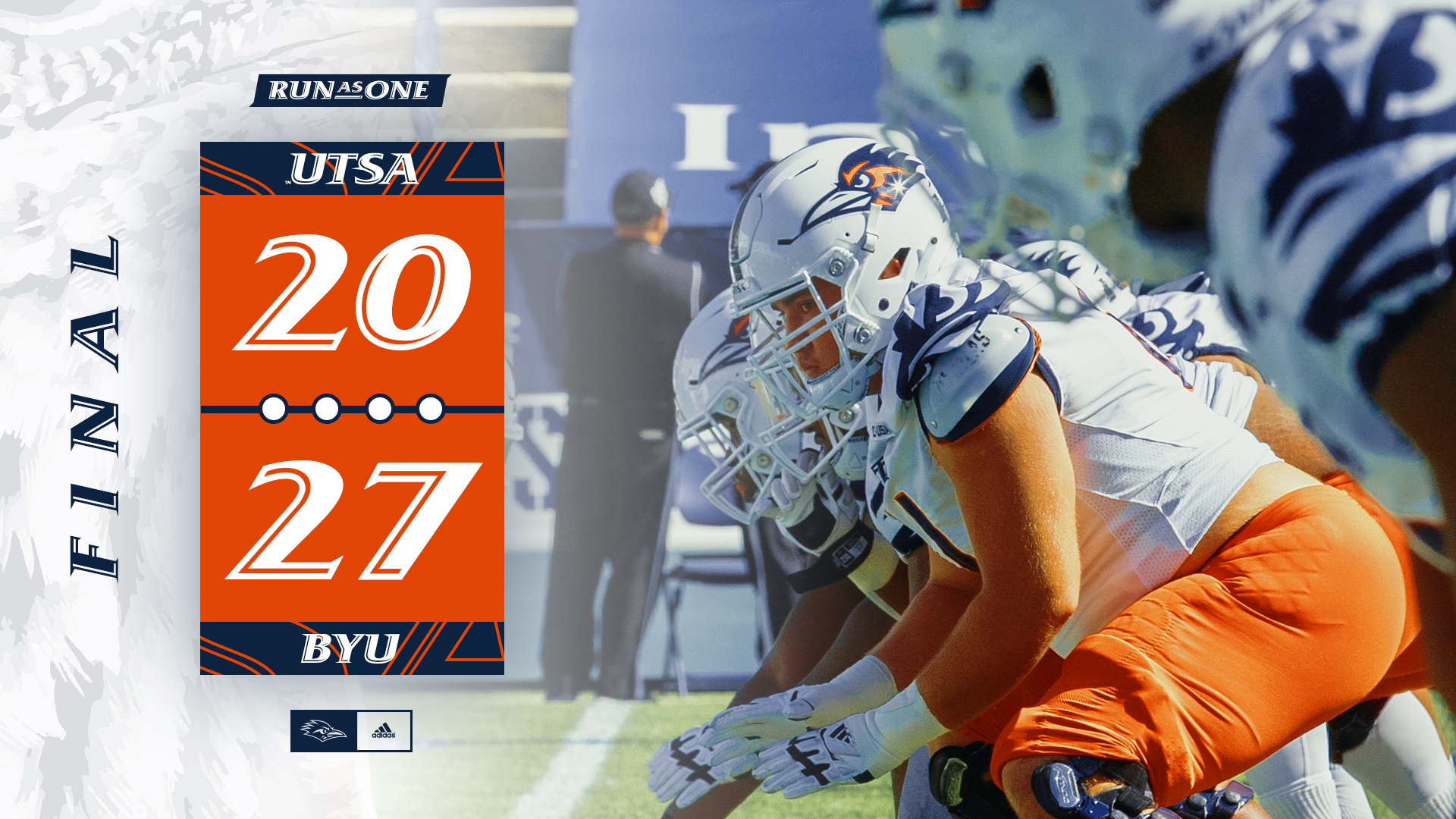 To be clear, Coach Traylor isn’t saying that his team played their best, but if they had, the Roadrunners would’ve gotten back in the win column. “We didn’t play our best ball, and still we were right there,” echoed back-up quarterback and near-savior of the game, Lowell Narcisse, “We’ve gotta stop beating ourselves.”

The last two weeks, the Roadrunners have played their stiffest competition to this point in UAB, who has been collecting more AP Top 25 votes but still sit unranked, and #15 BYU, who coupled with this win and the losses across the college landscape are likely to climb even higher. In both games, UTSA had an opportunity to get the ball back after forcing the opposition to punt. In both games, UTSA was flagged for a personal foul call of roughing the kicker, letting UAB and BYU both have the ball and a fresh set of downs to go into victory formation.

This isn’t to say that BYU didn’t deserve to win the game – They went out there and did what they’ve done to this point this season on the offensive end. The efficient quarterback that is Zach Wilson completed 22/30 passes for 292 yards for two touchdowns and no interceptions. Running back Tyler Allgeier provided a solid rushing attack with the Roadrunners’ defense focused on Wilson, carrying the ball 19 times for 116 yards and a score, and Wilson still added another 19 yards and a touchdown on the ground too. In total, BYU put up 470 yards of total offense on UTSA, still 100 yards shy of their season average of 585.7 yards per game coming into the contest, though only scoring roughly half of their season average scoring output (50ppg), with the 27 points today.

Like Narcisse and Coach Traylor alluded to, the real disappointment was the areas that UTSA beat themselves. The Roadrunners committed nine penalties for 79 yards lost, including the roughing the kicker at the end. Another flag that hurt the team today, and going into next week, was a targeting penalty called on Rashad Wisdom in the fourth quarter, causing not only the refreshed downs in the moment, but also disqualifying him for the rest of the game and the first half of next week’s game against Army. Wisdom, a leader and standout in the secondary, was removed from the 2nd half of last week’s game against UAB for targeting, and missed the first half today due to it. Players who receive three targeting calls in a season are eligible to be suspended for a full game.

While they didn’t help themselves with the penalties, a rough first half offensively didn’t do anything for the cause either. Frank Harris was finally cleared by the medical staff and ultimately Coach Traylor, to start today’s game, and while there were moments, the offense never really got going early on. Exiting near the end of the first half with an injury scare, Harris completed 7/13 passes for 58 yards and threw an interception. In a performance that Coach Traylor referred to as, “nothing short of remarkable,” Lowell Narcisse came in when Harris was shaken up, and would lead the rest of the way in a comeback effort, completing 17/20 passes for 229 yards, two scores and zero picks, showing confidence in his abilities, and those of his teammates, to spark a comeback. Something missing all day was Sincere McCormick who only carried the ball 11 times for just 42 yards, adding two catches for no yards.

As UTSA, now 3-2 after starting 3-0, prepares for the 4-1 Army Black Knights, the next week will still bring a lot of development around the Roadrunners. Coach Traylor emphasized after the game that kicking situations will be a focus of practice to cut down on those penalties, stating “I love their effort, but we’ve gotta get those penalties in the kicking game cleaned up.” When asked about the quarterback situation, whether to go back to Harris or stick with Narcisse, Coach Traylor said it will be evaluated through film and practice, stating that Frank Harris could’ve gone back in today, but Coach made the call in the best interest of Harris and the team to continue with Narcisse.

On the other side of the Army game next weekend, is the Conference USA portion of the schedule for the Roadrunners. After each of these first five games have been decided in the closing seconds, Coach Traylor did note that he’s worried about the stress and the wear that wire-to-wire football may have on the health and mentality of the young men on his team. “I’m concerned about my team, mentally and physically,” he said, “just for playing five games where just we go right down to the last play in all of them, with no open week, to play another very physical team in Army. We’ve gotta do a great job of coaching to make sure our kids have some stuff left in their tank.” Coach Traylor still expects the team will get better each week if the team can just stay healthy. Health has been an area of concern, primarily at the quarterback position, on the defensive line, and in the secondary.

Next Saturday, the Roadrunners (3-2) will host the Army Black Knights (4-1) at the Alamodome, with kick-off scheduled for 12:30pm CST. You can watch this game on the CBS Sports Network. Army is coming off a 14-9 win against Citadel, winning two games in a row. The Black Knights’ only loss this season was on September 26th against the #11 Cincinnati Bearcats. The Roadrunners should have a little more motivation in this game after Army beat UTSA last season at the Alamodome 31-13.