SAN ANTONIO – Not to make you feel old, but Rampage starting goaltender Friday night, Joel Hofer was 14 months old on 911.  His birthday has 00’s at the end of it.

Friday night was his professional hockey debut, and although he didn’t have 00’s at the end of his stat line, the teenager did a pretty good job in the 4-3 Rampage loss in front of 9,185 on Fan Appreciation Night in the final home game of the season.

The Stars playoff hopes took a serious hit when the Rampage rallied for the first time all season when trailing after two periods for only their seventh road win Wednesday night in Cedar Park. Texas really needed all six points against the Rampage and will only get four in a best-case scenario this weekend now, and most likely will be on the outside looking in when the dust settles Sunday night.

The road win also snapped a nine-game Rampage losing streak away from the AT&T Center. Difficult to believe, but the Rampage are 7-26-4 on the road this season — by far an AHL-worst this year and, to be honest, downright embarrassing, with Saturday’s finale back in Cedar Park.  The Stars can only hope Milwaukee loses twice — at home Saturday against Grand Rapids, which suddenly can’t figure out how to win hockey games, going 0-7-1 in the last 10, and then in Rockford Sunday.

However, if the Manitoba Moose manage to take one of two games in Chicago against the division-leading Wolves, the Stars are out no matter what happens Saturday at the HEB Center.

Then there’s Iowa…which has been in freefall the last two weeks but has enjoyed a renaissance thanks to some help from Minnesota after the big-league Wild missed the NHL playoffs.

In any event, a really good team will miss the playoffs. Meanwhile, the Rampage — not in that mix — had the luxury of playing Hofer on Friday, giving the teen a taste of pro hockey between the pipes and the kid did a decent job, although the game-winner he’d like to have back.

Hofer was challenged right off the bat, but the former Swift Current Bronco reacted well, sliding to his left to take away the lower net and stop a close in shot.

But the ensuing faceoff sent the puck back to Stars defenseman Gavin Bayreuther, who put some sizzle on a wrist shot that eluded Hofer for the first pro goal allowed by the former Blues’ fourth-round pick in last June’s draft.

When last year’s Dallas first-round draft pick, Ty Dellandrea, did his best Mitch Marner impression early in the second period, the Stars went up 2-0. The Star’s rookie, only 10 games out of Flint in the Ontario Junior League, mimicked Maple Leaf Marner’s penalty shot goal Thursday night vs. Tuukka Rask that left the Bruins goaltender prone in the crease with a gaping left side after a forehand, backhand-forehand scoop shot. Hofer recovered with a nice body save a minute later.

Hofer saved his best for the second period’s last minute, stopping another Joel, AHL All-Star Joel L’Essperence on a point-blank shot and then the follow-up by L’Essperence, who has made life miserable for four of the five Rampage goalies to see action against Texas this season with 5-4-9 in 11 games. With the exception of Evan Fitzpatrick, who played only 6:47 in relief, the other four Rampage masked men have a GAA against the Stars over four!

The Winnipeg native will return to the Portland Winterhawks next season, where he was traded to late in the season from Swift Current in hopes of helping them next year in the hunt for the Memorial Cup. But at least for one night in San Antonio, he got to play with men with facial hair, and he fit right in between the pipes.

This picture actually works for two of the Rampage bruisers, as Ryan Flinn, in this 2006-7 photo tangled with Thompson when Rocky, ironically, was part of the Blues organization in Peoria.

Thompson was the original Rampage destroyer. And he was a decent defenseman who would also take a shift or two up front if needed. Fun story, he grew his beard and hair that inaugural season, vowing to keep the hair flowing until he scored his first Rampage goal. Well, here comes March, and he begins to resemble Charles Manson when he finally sends the puck in from the blueline and into the net. The loudest cheers came from his wife and teammates, for now, the barber would beckon.

But no one really thought it would be so soon. When the team emerged from the locker room for the second period, there was Thompson, looking like a choirboy, clean shaven and locks shorn.

His NHL line: 25GP 0-0-0-117 PIM (Calgary/Florida). Rampage Stat 2002-2003  75GP 1-11-12 275PIM!  p.s. Rampage leading scorer that the first season, Jeff Toms told me after the game when Rocky scored that Toms tipped Thompson’s shot, but he denied it to the ref. Everyone wanted Thompson to have that goal so he stopped looking so disheveled!

Thompson is in his second season as head coach of the Chicago Wolves, with one season in Edmonton as an assistant with the Oilers. 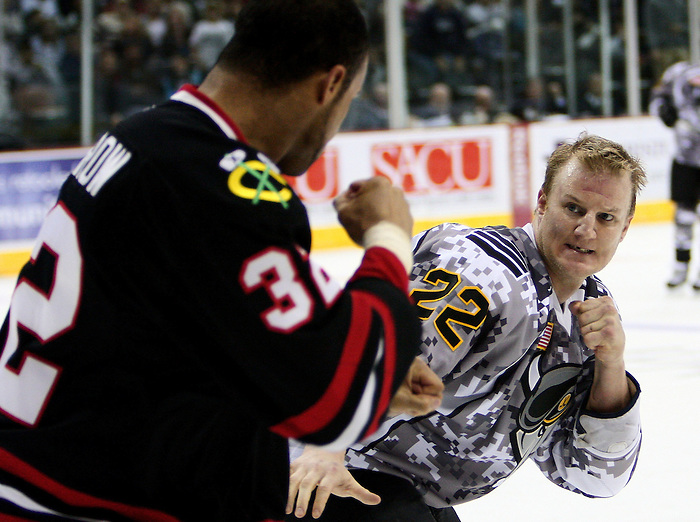 Do you have any idea how long, in this day and age in hockey, to amass 613 penalty minutes? Even super mischief maker, Brad Marchand of Boston needs his last nine years to do it.

It wasn’t that Frank was a hard-nosed player, but there were some nights where Lessard would get penalties for “stepping onto the ice.”  Lessard was an absolute trainwreck waiting to happen. You always knew when the former third-round Carolina draft pick was on the ice…someone was being crushed into the glass. Although it’s not an official stat, his ice time to penalty box time ratio had to be excessive. And when the gloves dropped, there was no dancing around…Lessard just let the knuckles fly from downtown. 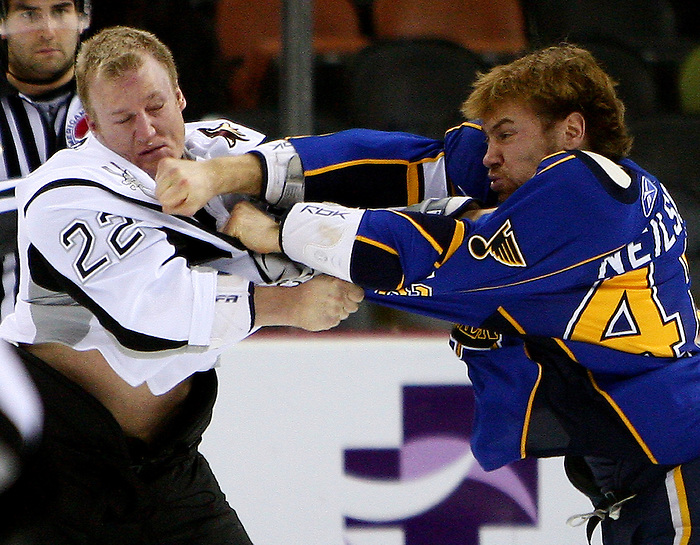 Sometimes, you don’t have to fight to be a bruiser. You just have to have the look. Honestly, I would never, ever, want to have Duncan Siemens mad at me. Thank goodness, he has always been in a good mood in my presence. But on the ice, Siemens creates space. And that’s what made him one of the most effective defensemen in Rampage history.

Just having the threat of possible bodily damage was enough, as Siemens only compiled 237 minutes in 172 Rampage games. But let me tell you something…if you want to see someone really tee off on a poor schlub, just dial up any youtube video of Duncan flailing away at someone who caught him in a mood and just shake your head. It never ended well for the other guy.

Tough as nails, but as nice a guy off the ice, Siemens was finally called up by the Avs last season for an extended stay in March, and scored his NHL goal on a night when he got his nose broken in an earlier fight. The picture is celebrated in the hockey world as “old school hockey.”  One of my all-time favorite Rampage players, Siemens finally got a spot on the Milwaukee Admirals, and should be in the AHL playoffs for the first time in his seven year pro career. 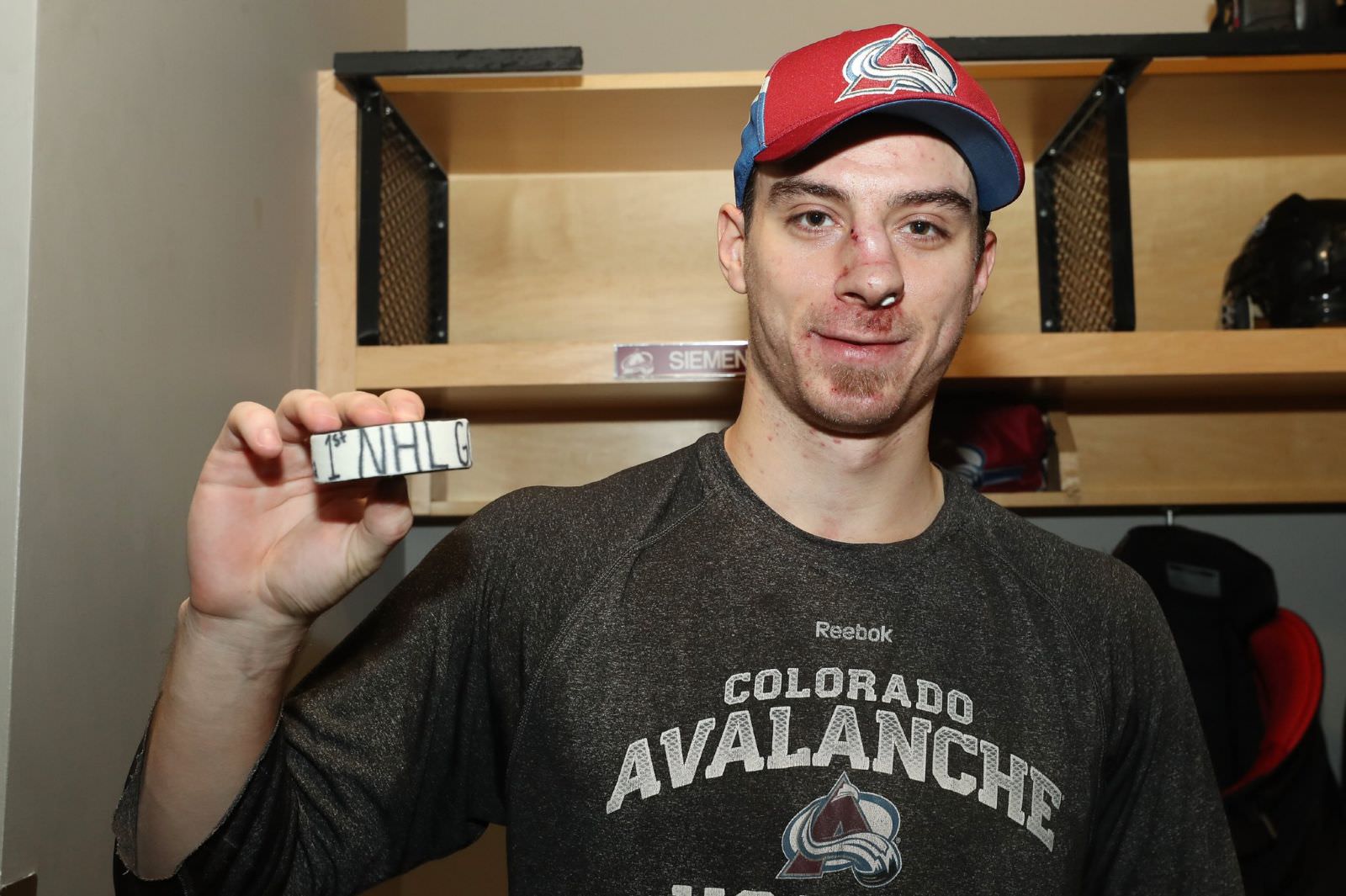 When Eric Selleck arrived with the return of the Florida Panthers in 2011, we knew what to expect…Selleck was on the Christmas card list of most AHL penalty box attendants, and he’d score five goals that season. For whatever reason, Eric scored five in his first three AHL seasons — first in Rochester, and then two straight in the Alamo City. He would have made it in his third season, but he was traded to the Chicago Wolves for Mark Mancari at the deadline — a deal that soured Mancari, a career 234-goal AHL scorer, who felt he was traded for a meathead.

Selleck was a fan favorite, to say the least, and without a doubt, was the fastest skater on the ice. Unfortunately, Eric was known more for his fists than his wrists, enjoying hands of stone both in bouts and in accepting passes from teammates. Selleck played the past season in Slovakia, posting his best offensive numbers with 11 goals and 35 points to go along with, of course, 135 minutes — getting to know those penalty box attendants in that Eastern European nation. Even more impressive was his +/- figure of +21!  Gotta love Eric Selleck!